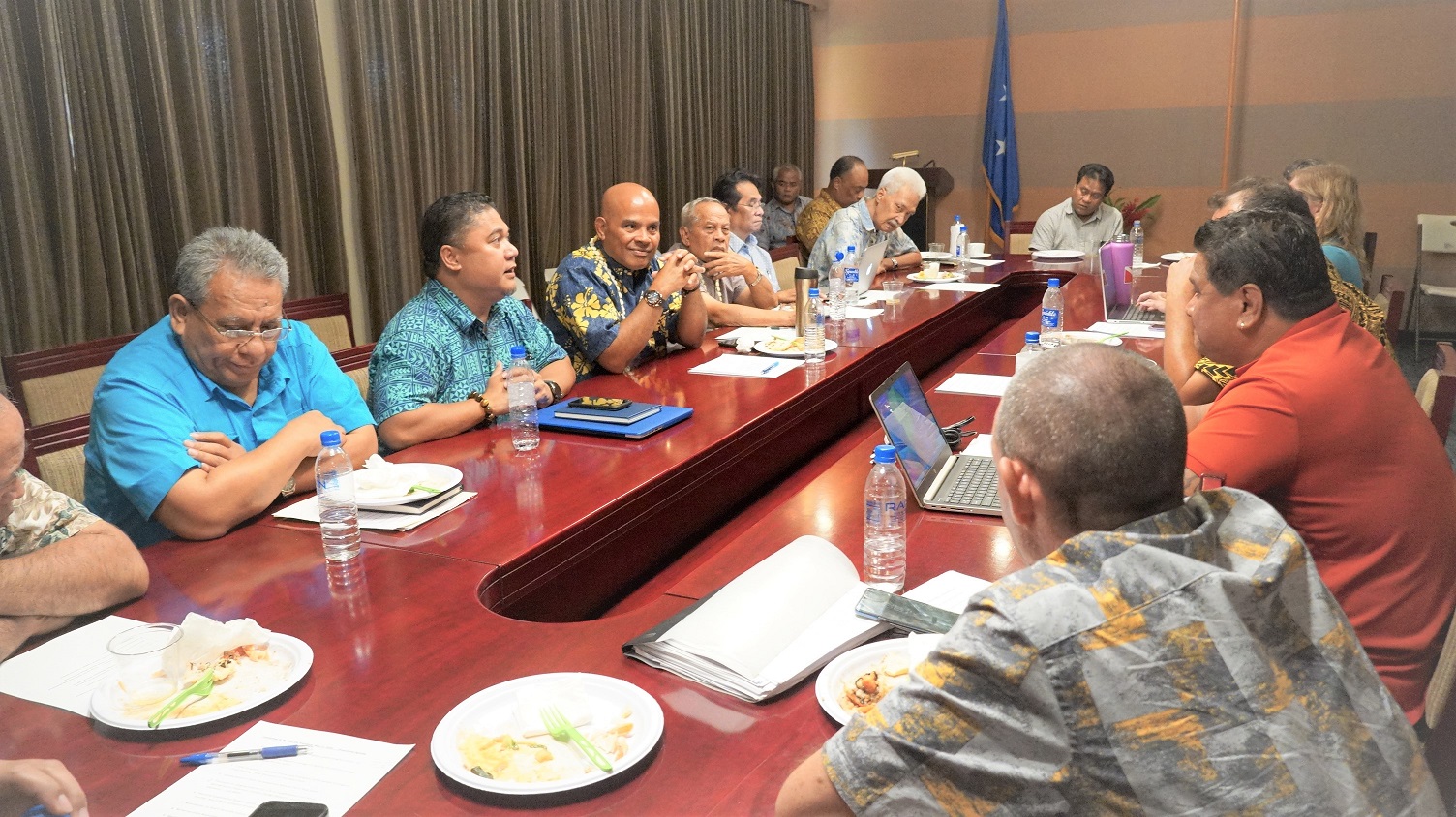 PALIKIR, POHNPEI. May 14, 2020– The Fourth Regular Session of the 21st Congress convened May 11, 2020, online - to begin the review and approval process for the 2021 budget for the national government of the Federated States of Micronesia.

With states locked-down as preventative measures against the COVID-19 virus, the Congress has resorted to remote, online sessions in order to meet its constitutional mandate.  In his letter to the President, Speaker Wesley W. Simina shared that despite the limitations caused by the pandemic, through “everyone’s cooperation and assistance, the public hearings and other challenges we face can be handled remotely.”

As such the budget session convened with members joining in from Congress Delegations offices in their respective states while the FSM Consulate Office in Guam is host to Floor Leader Singkoro Florencio Harper and Chairman of the Kosrae Delegation Paliknoa K. Welly.

A Committee to Wait comprised of the Pohnpei Delegation met with President David W. Panuelo to formally inform him that the Congress is ready to transact business. The President thanked the committee and expressed his wishes that the Executive and the Congress work together, even more so during these unprecedented times. His discussions with the committee surrounded matters such as the much-awaited economic stimulus package, updates from the Nation’s COVID-19 Task Force, a supplemental budget, nominations, grants and appropriations.

The Committee was presented with an agenda of Executive priorities for consideration by the Congress. Highlighted among the items were the following:

1./2. On the Stimulus Package/Unemployment Program to take place in the following weeks, President Panuelo mentioned that there is a proposal to ‘expand’ the coverage of eligibility for the stimulus package to support beyond the Tourism sector, as this stimulus package provides only for hotel, resturaunt and car rental personnel as this industry has suffered the most on account of the travel ban. He also added that there is a formula that will determine the amount of funds for the recently unemployed individuals, who lost their jobs as result of the pandemic, based on the the salaries of those meeting eligibility. In order for the program to streamline the distribution of stimulus checks, the President is appealing to the state governors to employ their finance departments to accommodate the National Government with the necessary financial information of eligible personnel.

3.The imposed lockdown has caused much financial hardship to many of the stranded citizens now forced to reside across the United States and within its territories. The President was sympathetic to the distress of stranded citizens and stated that he, among others, are anxious to bring FSM citizens back home. One of the topics of the meeting with the President is the precautionary theme, “How confident are we,” in allowing citizens entry back into the FSM from infected regions without causing the spread of the disease on our shores? In short, there must be no tolerance for error. One option that the President suggested is a ‘staggered inflow’ of up to 3 stranded citizens to undergo controlled testing, monitoring and identifying for infection as opposed to mass entry. The President informed the committee that he is not just focused on Pohnpei, but the other states as well, and is entreating all the states for a strong cohesive system in place to allow all FSM citizens stranded in other countries to return home to their respective states. In addition, the Secretary of Health and Social Affairs, Dr. Livinson Taulung, reported to the President that at present, all states have acquired ventilators, COVID19 test kits and the machines to detect the virus, much needed implements to combat the spread of the COVID19 virus.

4.Currently, the National Government is focusing on its maritime vessels and the Caroline Islands Airlines (CIA) to address transportation issues within the country. The President informed the committee that the status of the Caroline Voyager as of now, is damaged yet operable, the Chief Milo is currently dry docked in the Philippines and is under repairs and the Navigator is being serviced for generator parts. With this in consideration, the President is soliciting available maritime vessels upon the request of the state governors to service the outer islands of the states. CIA has also been directed to move its base of operations from the the state of Yap to Pohnpei by the 30th of May.

5.President Panuelo has asked Congress to review and repass with amendments to the legislation CB 21-116, this legislation is requiring an ex officio, specfically a cabinet secretary of any department to execute certain ministerial or administrative duties, in place when the President/or Vice President is physically absent. With regards to hazardous duty pay, the Chief of Staff, Leo Falcam, Jr., pointed out that the language of the legislation may qualify certain personnel to fall under eligibility, yet the question of meriting the hazardous duty pay may require Congress to review the legislation for further scrutiny.

6.Under the supplement budget request, the President is requesting $75,000 for a shortfall for housing allowance and $20,000 for a new personnel office.

7.Nominations were discussed, and noted were the vacant membership positions for the Insurance Board, Telecom Board, and a Supreme Court associate justice position.

Senator Aren Palik raised the question of debt relief for the state of Kosrae. In response, President Panuelo assured Senator Palik that he has discussed the issue with the Department of Finance and Administration for advisement and will be exploring possible options, one being to seek additional information from ADB and the World Bank.

Senator Ferny Perman announced that the project for 18 additional rooms for the Pohnpei State Hospital has been awarded to a contractor, but in lieu of the pandemic, they will be upgraded to Intensive Care Units (ICUs) that will be requiring an additional funding of $500,000.

And last on the agenda, President Panuelo has informed the committee that the ‘State of the Nation’ address will be delivered on May 20th, 2020.