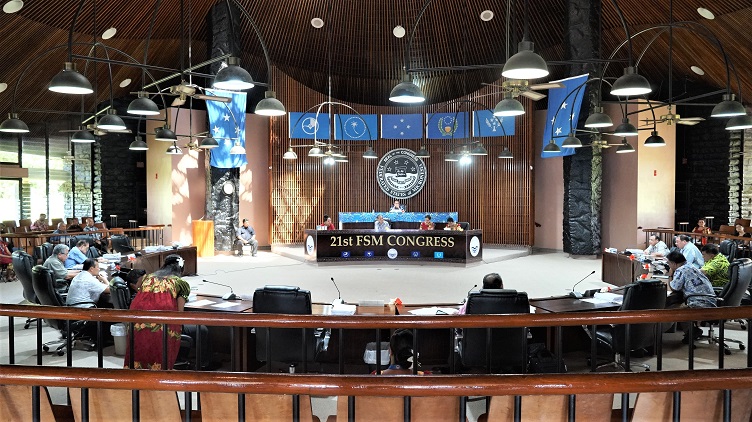 PALIKIR, POHNPEI. January 31, 2020– At the end of the first week of its Third Regular Session, the 21st Congress of the Federated States of Micronesia passed three Congressional Acts along with two Resolutions to address current issues of national and regional concerns.

The 21st Congress had convened on January 27, 2020, for its Third Regular Session to address matters pending before the Body and also review matters submitted by the Executive Branch for its consideration. The Committee to Wait met with President David W. Panuelo where the Executive’s issues were discussed at length and prioritized for consideration and action by the Congress.

At the end of Week One of the Third Regular Session, the first measure enacted by the Congress is a prohibition on the importation of one-time-use disposable items. Congressional Act (CA) 21-73, created a new chapter four under the statute on Environmental Protection - Title 25 of the FSM Code, to prohibit the importation of one-time-use disposable Styrofoam and plastic food service items along with plastic shopping bags.  The Act allowed for a transition period until July 1, 2020.

Through CA 21-74, the Congress clarified that the allowable recesses to be called by the Constitutional Convention included “one extended recess of between 3 and 30 consecutive calendar days.”  The Act further noted that those Delegates not paid by the national state and state government are entitled to $200 daily allowance.

In light of the recent Australia Fires the Congress enacted CA 21-75, to appropriate $100,000 to fund relief efforts currently underway in Australia due to recent wildfires.

Along with the Congressional Acts, the Congress had during its first week of session adopted Congressional Resolution (CR) 21-96, to confirm the Johnny P. David to serve as the National Government’s representative on the Board of Directors of the FSM Petroleum Corporation.

The final measure of week one of the Third Regular Session of the 21st Congress of the Federated States of Micronesia is CR 21-105. Through CR 21-105, the Congress approved a $102,640 grant from the United Nations International Children’s Emergency Fund (UNICEF) to fund and support the Measles Outbreak Responses Program in the Nation.

The Third Regular Session of the 21st Congress is scheduled for 20-days and is open to the interested general public.