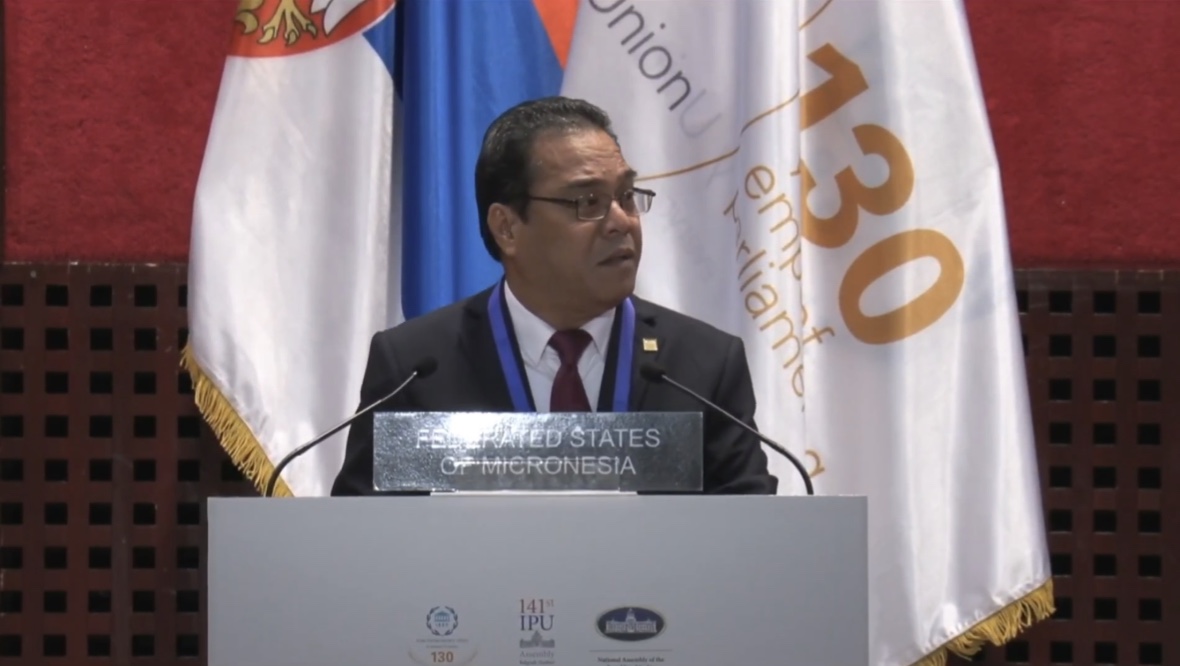 Belgrade, Serbia. October 18, 2019. – Speaker Wesley W. Simina and Senator Robson U. Romolow of the FSM Congress addressed national parliamentarians from around the world at the 141st Assembly of the Inter-Parliamentary Union (IPU) in Belgrade, Serbia on the debate theme: “Strengthening international law: Parliamentary roles and mechanisms, and the contribution of regional cooperation.”

The 141st IPU Assembly, which was held from October 13 to 17, 2019, brought together over 1,700 participants, including parliamentarians from some 140 countries.

In his address, Speaker Simina calls on the parliamentarians “to preserve, strengthen, and promote respect for international law and global legal order”, warning that global legal order is “being threatened by the revival of old political passions for populism, unilateralism, nationalism, even self-determination, to name a few of the emerging political rallying cries of today.”

He explains that without international law, “[i]t will be a world like the bad old days: when might made right, when the big and strong colonized and oppressed the small, and small countries had only the duty to remain silent.” Further stressing that “[w]ithout international law and legal order, we the small states would not have the chance of advancing our common interests in forums like the IPU and the United Nations.”

Senator Romolow highlighted some of these interests in his remarksby noting a number of international treaties which the FSM Congress has aceded to and ratified, including the Paris Agreement and the UN Convention for Laws of the Sea (UNCLOS). He notes that “[i]nternational law is a serious and at times existential matter for Micronesia”, alluding to the threats climate change has on Micronesia and the economic dependence Micronesia has on its ocean.

The debate, which the FSM Congressional delegation participated in during the 141st IPU Assembly, resulted in the adoption of the Belgrade Declaration - Strengthening international law: Parliamentary roles and mechanisms, and the contribution of regional cooperation. The Assembly also endorsed a declaration to mark the 30th anniversary of the Convention of the Rights of the Child.

The 141st IPU Assembly also adopted an emergency item resolution adressing climate change, which calls on all parliamentarians to work with their governments to implement the Paris Agreement, among other actions.

Additionally, the 141st IPU Assembly also adopted a resolution titled: Achieving universal health coverage by 2030: The role of parliaments in ensuring the right to health, which calls on “parliaments and parliamentarians to take all applicable legal

2030 and to ensure quality, affordable and accessible health care”, among other actions.