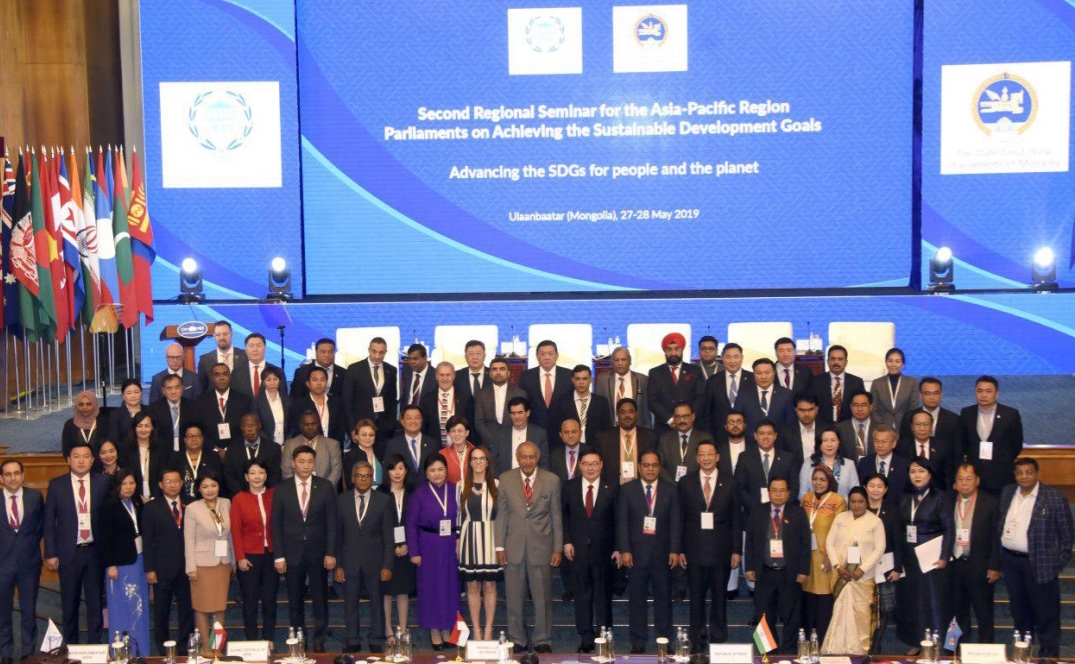 Ulaanbaatar, Mongolia. May 29, 2019. Speaker Wesley W. Simina led a delegation from the FSM Congress to the Second Regional Seminar for the Asia-Pacific Parliaments on Achieving Sustainable Development Goals (SDGs). The State Great Hural (Parliament) of Mongolia and the Inter-Parliamentary Union (IPU) jointly organized the seminar in Ulaanbaatar, Mongolia from May 27–28, 2019.

The seminar provided an interactive platform for more than a 100 parliamentarians in the Asia-Pacific region, civil society groups and UN representatives to discuss experiences and challenges on parliamentary engagement in the implementation of the 2030 Agenda for Sustainable Development.

At the outset of the seminar, the UN ESCAP reports that “at the current rate of progress, no [SDGs] will be met in the Asia and the Pacific by 2030.” With only 11 more years to go, this poses an alarming sense of urgency on the Asia-Pacific region as it represents 60% of the world’s population.

An urgency, which Speaker Simina believes ought to start with more in-country citizen involvement and raising awareness on the SDGs.

He explains that the implementation of the SDGs has primarily been with the executive government with limited involvement of the national parliament, the state governments, the private sector, and civil society.  Further adding “at least for my country, we, as parliamentarians need to further educate ourselves and the people we represent on the SDGs.”

The seminar also highlighted parliamentary roles in SDG 4 – Quality Education – as being critical to achieving all other SDGs, particularly reducing poverty in the region. Climate Action – SDG 13 – was also highlighted especially by participating parliaments from Pacific countries and for which the delegation from Micronesia called for “less talk, and more action” from regional parliamentarians.

Speaker Simina, along with IPU President Ms. Gabriela Cuevas Barron and other heads of delegations, also paid a courtesy call on HE Mr. Buttulga Khaltmaa, President of Mongolia.

For more information on the outcomeof this regional parliamentary seminar, and on other activities of the FSM Congress, please visit www.cfsm.fm.