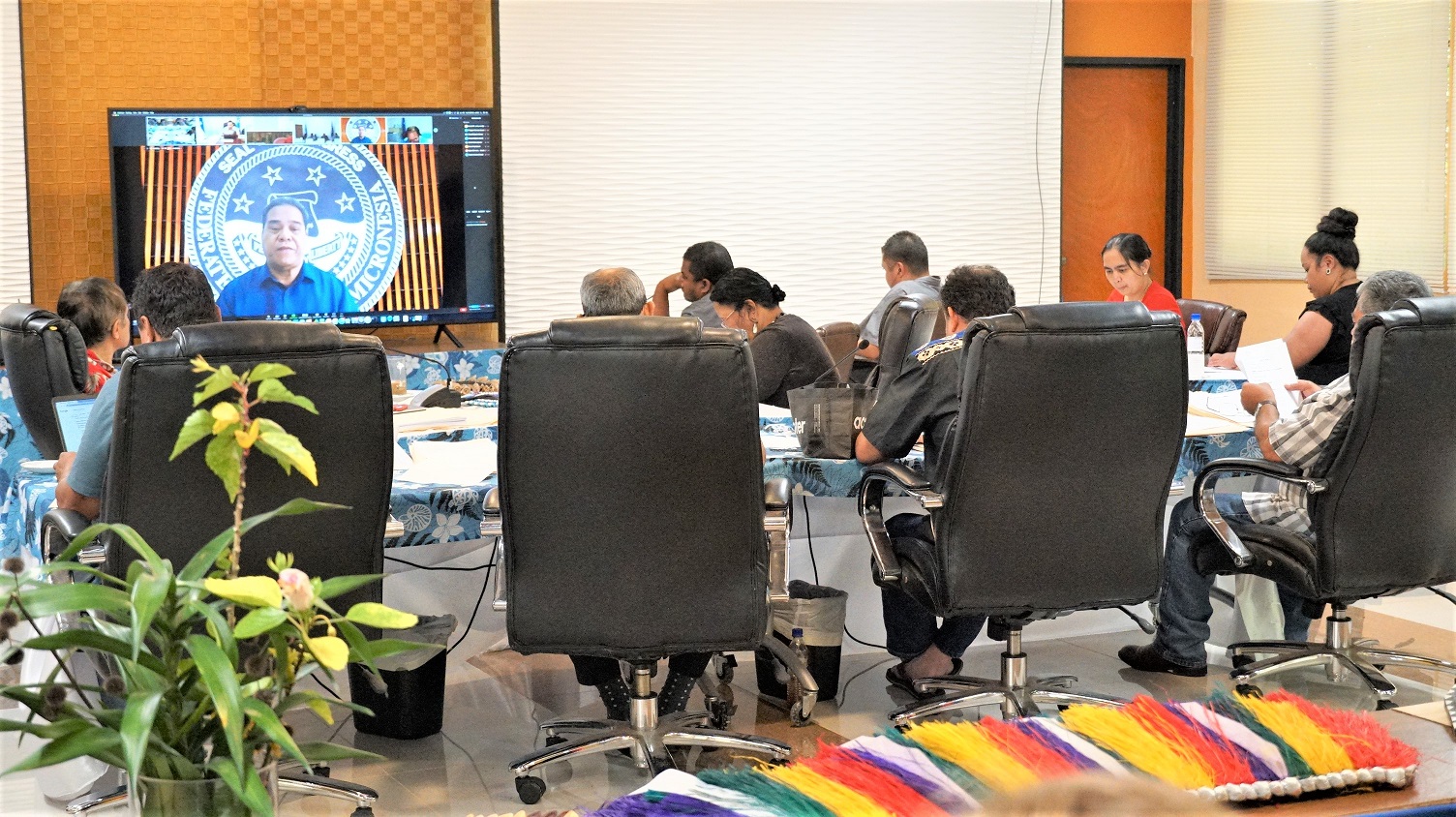 PALIKIR, POHNPEI. May 26, 2020 – Week Two of the Fourth Regular Session, the 21st Congress adopted measures that included a tribute to the late Chief Justice of Chuuk State and held the first-ever, online State of the Nation address by the President of the Federated States of Micronesia.

President Panuelo shared with the Congress the actions taken by the Panuelo-George Administration for the past 12 months in along with the government’s actions in the continuing challenges to its Nation-building efforts. The President’s address underpinned unity as the Nation’s greatest strength to meet the challenges, “like all challenges we have faced these past 41 years, it is one that we will overcome so long as we continue to remain united on all important matters to our Nation and our citizens.

“Our Nation’s greatest strength is its unity. By paddling together in one direction, we will keep ourselves afloat in this storm…” concluded the President in his Address to the Congress and the Nation.

Other matters addressed by the Congress included the adoption of Congressional Resolution 21-114, to express the sincere condolences and sadness of the 21st Congress to the family of the late Honorable Camillo Noket, Chief Justice of the Chuuk State Supreme Court who passed on May 4, 2020. The late Chief Justice devoted his life to the legal profession serving prominent roles both at the state and national levels. His roles in the FSM National Government culminated in him becoming the Attorney General for the Nation (’92 -’98). He was a delegate to the Nation’s past two Constitutional Conventions and also to the current 4th FSM Constitutional Convention in which he was the at-large delegate from the state of Chuuk. The late Noket’s extensive services to the Chuuk State government in the legal field led to his final role for the state as its Chief Justice (2006 – 2020), the late Chief Justice Noket was 76.

Another measure from Week Two of the Fourth Regular Session is the repass of Congressional Act (CA) 21-116, which was first passed during the Fourth Special Session in April but vetoed and returned by the President.  The Committee on Ways and Means reviewed the veto of CA 21-116 along with the veto message and determined that the President’s veto is purely based on his policy rather than a legal or constitutional defect of the Act. Accordingly, the Congress overrode the President’s veto and the Act has now become Public Law 21-116.

The Congress also passed CA 21-117, to allow a recess to be called by the Constitutional Convention for up to three months due to the coronavirus emergency.

Through CA 21-118, the Congress made amendments to previous laws to change the use of certain funds previously appropriated to fund public projects and social programs for the people of the state of the Pohnpei, and for other purposes.

Rounding out the measures of Week Two, this the adoption of Congressional Resolution 21-145, to authorize the President to resubmit the nomination of Mr. Kasio E. Mida to serve as a member of the Federated States of Micronesia Insurance Board.

And finally, the Congress adopted CR 21-146 to set the ceiling of total funds available for appropriation for the Nation’s general fund for fiscal year ending September 30, 2020.

The Fourth Regular Session of the 21st Congress of the Federated States of Micronesia is scheduled for 20 days ending on May 30, 2020, unless shortened or extended by resolution.

With respect to the current advisories from the Pohnpei State Government and the FSM National Government discouraging public gathering and encouraging social distancing, the Fourth Regular Session of the 21st Congress is closed to the general public.   The public is however welcomed to follow the daily sessions which are streamed live and available for viewing at the Congress website: www.cfsm.gov.fm.