Congress Session Adjourns with Invitation for President to Address the Nation 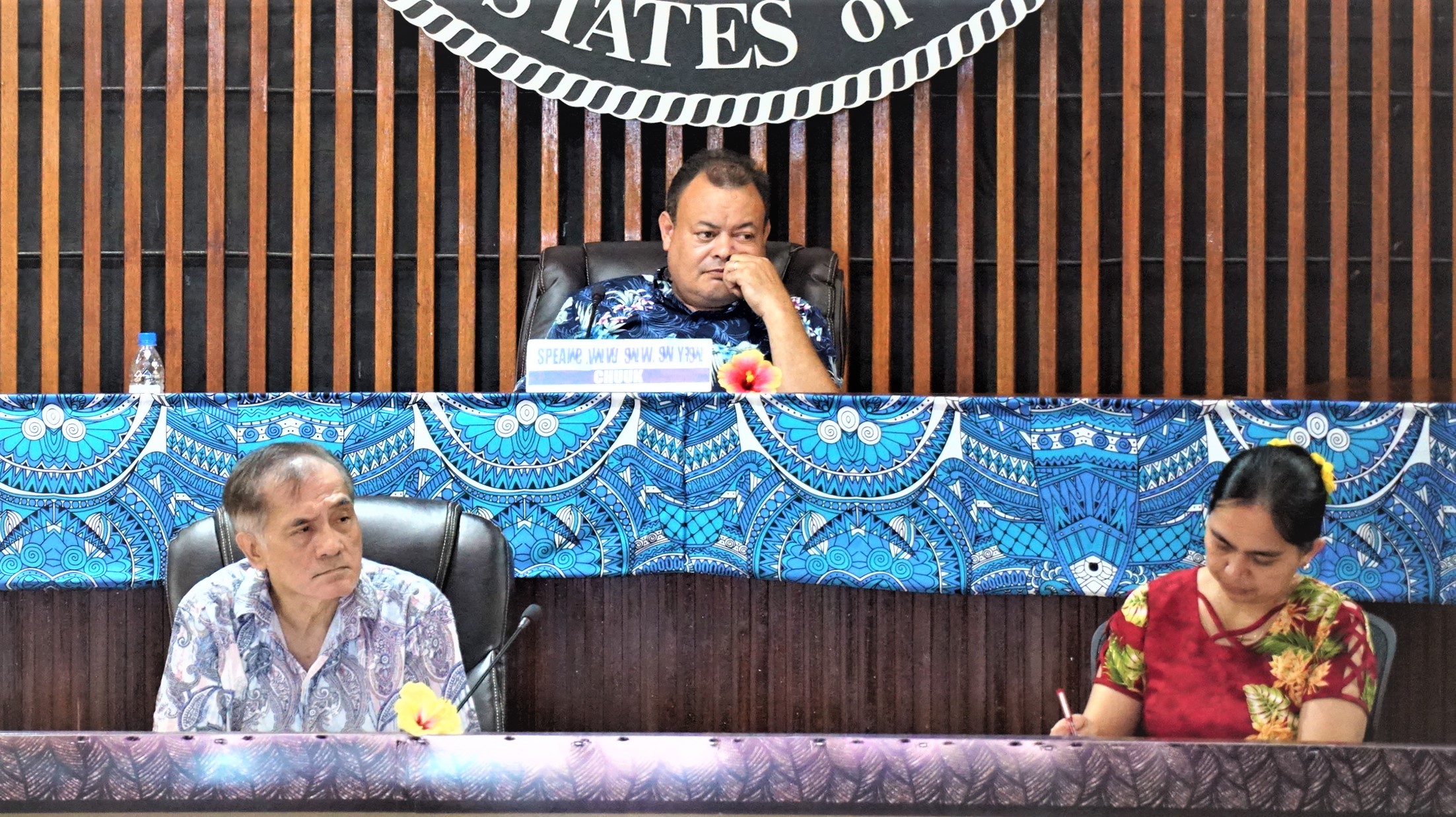 PALIKIR, POHNPEI. February 17, 2020-  The Third Regular Session of the 21st Congress of the Federated States of Micronesia adjourned sine-die on February 13, 2020, with the passage of measures that included 20 Acts and 18 Resolutions, among which was an invitation for the President to address the Nation.

The Congress, through Congressional Resolution 21-103, invited the President of the FSM to deliver a State of the Nation Address in May of 2020 or at a time of his convenience and share the progress of the current executive administration in achieving its goals, programs and priorities.

At the end of its third week, the 3rd Regular Session of Congress passed Congressional Act (CA) 21-90, and made technical corrections to title 22 (Agriculture and Livestock) of the FSM Code by reinserting section 416 to allow for recovery of overtime costs from aircraft and sea vessels when quarantine personnel work outside of official working hours and other circumstances.  Public Law No. 11-41 had enacted a new section 416 to title 22, which was unintentionally omitted from the 2014 F.S.M.C. (Annotated). Through the passage of CA 21-90, the Congress reinsert section 416 to accurately reflect the provisions of the P.L. No. 11-41.

Another amendment to the FSM Code was through CA 21-92, where the Congress further amended title 24 F.S.M.C. (Marine Resources), section 404 - specifically the subsection on ‘Closure of high seas areas’. Through the Act, the National Oceanic Resources Management Authority (NORMA) has the discretion, on a case-by-case basis, to exempt a fishing vessel from the existing prohibition of fishing in the neighboring high seas area bounded by national waters of the FSM.

To address needs of the people of Chuuk, Kosrae, Pohnpei and Yap, the Congress passed CA 21-91 to appropriate $4.2 million from the General Fund of the FSM to fund public projects and social programs throughout the four states.

The passage of CA 21-86, changed the use of funds previously appropriated under PL No. 20-60 for public projects and social programs in the states of Chuuk and Pohnpei.  The remaining Acts were amended to specific states and they included:

For the state of Chuuk, CA 21-85 and CA 21-88 changed certain use of funds previously appropriated for public projects and social programs in the state;

For the state of Kosrae, CA 21-89 changed the use of certain funds previously appropriated for public projects and social programs in the state;

Through CA 21-84, amendments were made to the use of certain funds along with changes to allottee of funds previously appropriated for social programs and public projects in Pohnpei State;

And finally, through CA 21-87, amendments were made to change the use of certain funds previously appropriated for social programs and public projects in Yap State.

Along with the Congressional Acts, the Congress also adopted CR 21-113 to express its sincerest condolences and sadness to the family, the people and the government of the state of Kosrae on the passing of former Governor Robert James Weilbacher.

The following resolutions are among the final adopted measures of the session:

CR 20-100, approved and accepted a grant of $4,248,000 from the U.S. Federal Aviation Administration (FAA) to provide funding for the Yap International Airport;

CR 21-107, approved and accepted a $5 million grant from the Asian Development Bank (ADB) to finance preparatory activities to be implemented by the Chuuk Public Utilities Corporation (“CPUC”);

CR 21-110, set the ceiling of funds available for appropriation from the General Fund for the fiscal year ending September 30, 2020;

CR 21-111, congratulated the state of Missouri, the city of Kansas City, and the Kansas City Chiefs football team for winning the 2020 Super Bowl;

CR 21-112, expressed condolences and sadness of the 21st FSM Congress to the People’s Republic of China for the ongoing novel coronavirus epidemic;

CR 21-116,approved and accepted a $100,000 grant from the U.S. Department of Health and Human Services, Centers for Disease Control and Prevention, to fund the FSM Preventive Health and Health Services Block Grant 2019, including all the terms and conditions of the assistance;

CR 21-118,approved and accepted grants in the total amount of EUR 14,200,000 from the European Commission under the Economic Development Fund 11 (EDF 11), to fund the Sustainable Energy and Accompanying Measures in the FSM; and finally,

Details of all measures passed and adopted during the Third Regular Session of the 21st Congress can be accessed through the website of the FSM Congress at: www.cfsm.gov.fm