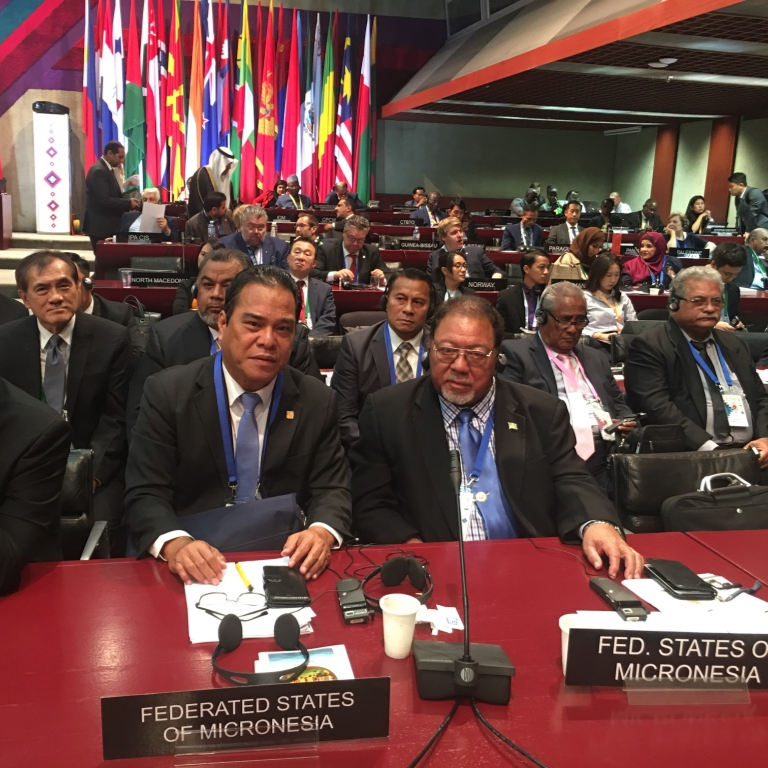 Belgrade, Serbia. October 19, 2019. –A delegation from the Congress of the Federated States of Micronesia (FSM) joined over 1,700 participants, including parliamentarians representing some 140 countries, to discuss issues of international law, climate change, universal health coverage and other issues of national parliamentary interests during the 141st Inter-Parliamentary Union (IPU) Assembly in Belgrade, Serbia from October 13 – 17, 2019.

The FSM Congressis one of 179 national legislative bodies that make up this global organization for national parliaments. When permissible, the FSM Congress joins the IPUAssemblies to promote matters of national interests, as well as engage in parliamentary diplomacy through various regional and bilateral cooperative meetings.

Bilateral meetings included a meeting between Speaker Simina and Speaker Gojkovic of the National Assembly of Serbia wherein they sought to build upon the parliamentary relationship between the two countries.

On a more regional scale, the FSM congressional delegation also took part in the Asia Pacific Group (APG) meeting where the parliamentarians agreed on candidates to represent the geopolitical group to various committees and groups in the IPU. Favorable to the FSM’s interest, the APG also agreed to present an emergency agenda item addressing climate change to the IPU Assembly. Among all other emergency items presented by other geopolitical groups to the Assembly, the 141st IPU Assembly voted to address climate change as an emergency item followed by the adoption of a resolution calling for action to address climate change.

Speaker Simina also engaged in the Speaker’s Dialogue on Governance, a platform for high-level political exchange amongst the Speakers of parliaments at the 141st IPU Assembly. The dialogue focused on governance and the roles of parliaments in the areas of development, economy, security and human rights.

For a complete list of the outcomes of the 141st IPU Assembly and related meetings, please visit: https://www.ipu.org/event/141st-assembly-and-related-meetings#event-sub-page-21300/

For more information on this and other FSM Congressional activities, please visit www.cfsm.gov.fm.