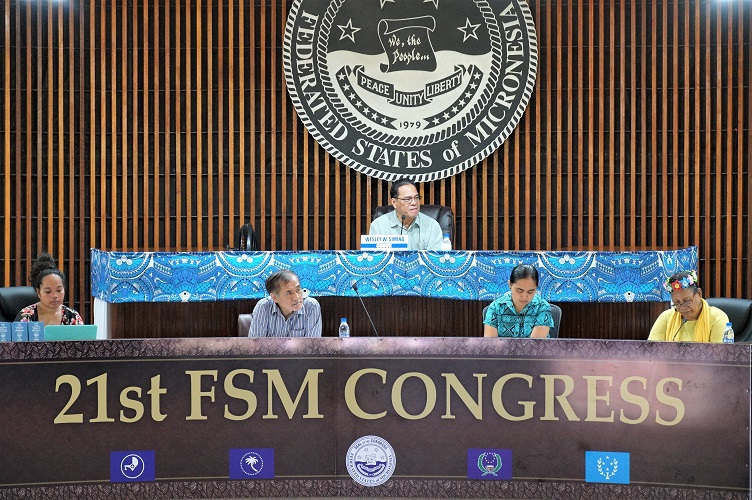 PALIKIR, POHNPEI – September 6, 2019. The Twenty First Congress of the Federated States of Micronesia as convened on May 11 2019, began their session by making amendments to some sections of the FSM Code and also extended lapse date for certain funds previously appropriated to assist the social programs and public projects in the states.

The Congress revisited the national corporation law and made an amendment to Section 137 of title 36 [CORPORATIONS AND BUSINESS ASSOCIATIONS]of the FSM Code to delete the reference to bearer share. The change is reflected in Public Law 21-02.

Through Public Law 21-04, the Congress amended section 204 of title 2 [EXECUTIVE] of the FSM Code to remove the Division of Personnel from the Office of the President. Under the heading of Other Executive Offices, the law created a separate, stand-alone Office of Personnel.

The Congress also corrected certain technical errors in title 11 (CRIMES) of the 2014 FSM Code as annotated specifically to section 1141 on “Trafficking” and section 1147 on “Distribution to Persons under 18.”  All the corrections have been signed into Public Law 21-08.

Another amendment made by the Congress was to title 54 (TAXATION AND CUSTOMS) of the FSM Code to change the corporate tax system from a flat rate to a tiered system based on the taxable income. According to Public Law 21-09, the three levels of taxable income are as follows:

Finally, the Congress made three amendments to title 55 (GOVERNMENT FINANCE AND CONTRACTS) of the FSM Code.  The first amendment was made to the chapter on Public Contracts, specifically section 403 – on “Competitive Bidding Requirements.”  The amendment clarified that the competitive bidding requirement applies ONLY to contracts for which the allottee is a National Government agency.  In doing so, it raised the minimum bidding requirements for all contracts for construction projects from $20,000 to $50,000, and for the purchase of personal property from $50,000 to $100,000. The amendments have been signed into Public Law 21-11.

The second amendment to title 55 was made to the chapter on the FSM Trust Fund, specifically section 1204 – on “Purpose.” Accordingly, the amendment was to clarify that the purpose of Account A and Account B of the FSM Trust Fund is to offset shortfalls in local revenues for the FSM Government. The amendments have become Public Law 21-12.

In its final amendment to title 55, the Congress addressed the chapter on Financial Management, specifically to add a new subsection (3) to section 226 – on “Required Reports.” The new subsection (3) requires annual reporting from all programs and projects funded by foreign financial assistance or foreign grants to be submitted to the Congress no later than April 1 of each year. The amendment has become Public Law 20-17.